Star Trek the series, first premiered on September 8, 1966. I was a college sophomore living in a dorm. Somehow I found Star Trek on the TV in the common room and it became a life-long favorite. I’ve seen everything, sometimes twice!

If you’re a fan of Star Trek, what the appeal for you? For me it was being science fiction–a glimpse into the possibilities of the universe. Also, the characters. But most of all, the message.

This is it, my Sunday Sermon. The way I always longed for life to be. I don’t trust humanity enough to see it happen, but a girl can dream, can’t she?

Peace and Love and get vaccinated.

Spring has sprung in South Texas

Over the past two weeks Spring arrived in San Antonio. Green leaves are budding out on just about everything, and our back courtyard citrus trees are full of baby blossoms. 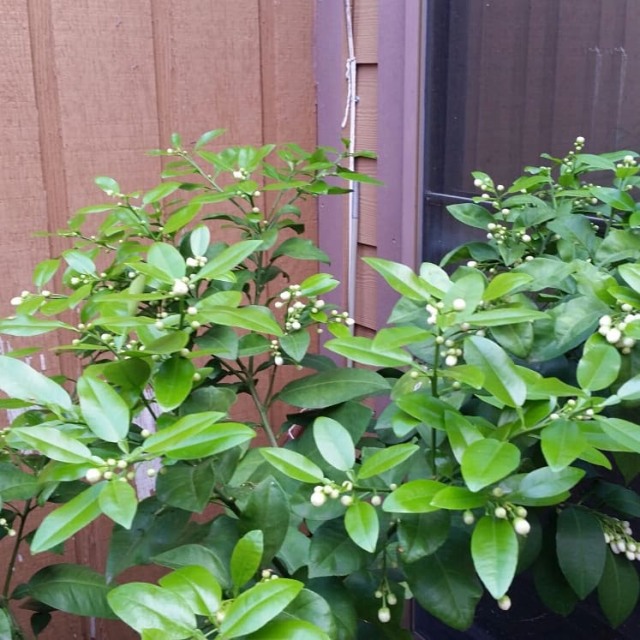 I went to the movies, again!  “Annihilation”  is a very cool sci-fi flick with an all-woman team front and center of the action. After not attending movies in a theater for a long while, I’ve really enjoyed getting back into it.

I drove someone older than me to their doctor appointment for Northeast Senior Assistance (NESA). Fastest trip ever. Sometimes you have to wait and wait and wait.

The Friends of Spare Parts Board of Directors, of which I am President, went to a Premier Escape Room “where  a group of friends or fellow coworkers are locked in a room, and you have 60 minutes to escape” by solving the clues–in this case, to determine the foreign agent. It was interesting and fun. You’ll have to guess if we succeeded.

A couple of things I learned last week:

Some veggies, like carrots and spinach, are healthier cooked than raw–from Prevention Magazine

I also found that frozen, cooked spinach is very inexpensive and great to add to soup, rice, casseroles…the opportunities to go green in your diet are endless.

The Black Panther movie was very good, determined by the fact that I thought about it quite a lot afterward–one of my ways of judging a movie or TV series. Also, the women characters in the movie kick-butt.

Emma Gonzalez kicks-butt and my hope for a new generation of smart leaders is renewed. For undoubtedly Emma and her fellow students activists are those leaders. She also has more Twitter followers than the NRA. Yay!

Donald Trump is still lying every time he opens his mouth and he still doesn’t understand how the government functions.

Oh, the horror of it all

The exact definition of a scary movie can be frighteningly hard to express. There are hauntings, thrillers and paranormal activity. Movies with sinister classic characters, monsters, sci-fi with monsters; movies with slashers, or just a lot of blood and guts. There’s lots of cross-over, and much discussion and difference of opinion. But for the purposes of my ‘small blog’ suffice it to say “I love scary movies across all genres”

When I was about nine years old and my brother just five, our mom would drop us off at a downtown Columbia, SC movie theater for the Saturday matinee. The house was full of unaccompanied kids watching a creepy 50’s creature flick—good scary fun! Tarantula, The Blob, Fiend without a Face, Invasion of the Body Snatchers were just a few. My little brother and I were terrified. We would scream, hold each other and try to crawl under the seats to hide our eyes from the horror of it all. When I began to have nightmares and walk in my sleep on Saturday nights, Mom finally decided we couldn’t go have the bejeezus scared out of us anymore. I think I was relieved and sad all at the same time.

Ah, but I was already ruined.

I have wondered why we humans like to be frightened. So I asked the almighty internet guru, Google. “There’s also a hormonal component when it comes to fear and enjoyment. The hormonal reaction we get when we are exposed to a threat or crisis can motivate this love of being scared. The moment we feel threatened, we feel increasingly more strong and powerful physically, and more intuitive emotionally.” This was written in a fairly recent article on the ‘science behind the scream.’  The psychoanalyst Dr. Carl Jung believed horror films “tapped into primordial archetypes buried deep in our collective subconscious – images like shadow and mother play important role in the horror genre”. Read more from Psychology Today.

From the article Our fascination with horror, “There’s something about horror that speaks directly and instinctively to the human animal. Millions of years of evolutionary psychology have ingrained in our minds certain fear triggers – a survival instinct.”  Think back to our more primitive days. Everything must have been fairly scary—hunting, fire, animals, anything new or unknown…being scared stimulates the imagination and our brains work on an adrenaline high to figure out how to handle the situation. Scary or adventurous tales told by the fireside and handed down for generations are part of our human cultural.

Later on in my teens, Vincent Price was one of the favorite sons of scary movies. Every Tuesday night, we would make tuna fish sandwiches, gather in the family room and watch “Vincent baby” on our black and white TV.  This was also the era of Alfred Hitchcock, the Twilight Zone and Outer Limits.

Then I saw Psycho. This proved to be somewhat of a milestone in scary movies. It wasn’t even in color! I can tell you it took years before I didn’t at least think of the chilling, shower scene with its eerie little screeching sounds when I took my daily shower. I was eight months pregnant when I saw the Exorcist. I was petrified and couldn’t sleep for days.

Granddaughter Eve and I gave created a somewhat creepy tradition of our own as we gather the snacks and watch scary movies two or three at a time. I must admit I am not crazy about some of the new genre of horror films—the too much blood and gore. And Eve, thinks some classics like The Birds and Rosemary’s Baby were boring. We did agree on The Conjuring, The Grudge, Paranormal Activity (all of them) and The Ring.

Favorites? Oh yes. There is a startling number of favorite scary movies lists on the internet. This is a short list of a few favs of mine:

Freaks –if you haven’t seen this you should. A 1930’s classic

Penny Dreadful is a very good Showtime series that encompasses all your favorite classic scary characters is one show. Add all the American Horror Story seasons, especially “Hotel” with Lady Gaga.

This is a fun little scary video.

Confessions of a Streaming Addict

OK, I admit it’s true. I am addicted to streaming.

Several years ago we cut the cable TV and bought a ROKU box. The ROKU is a magic box that allows you to watch a variety of streaming channels including Netflix, Amazon Prime, news and movie channels and a whole lot more on your TV set.

My first favorite was watching TV shows in binge mode. No commercials, pause when you want to, watch a whole season in back to back episodes. Who could ask for anything more. I started out with “The Tudors” and

“Nip Tuck” and progressed to “Mad Men.” Recently, I watched all 196 episodes of “Supernatural”–not all at once, silly.

My grandkids share their favorites and they have surprisingly good taste. Or, at least we agree on genres. My granddaughter and I watch horror movies–the old classics and the new not-so-classic like “Paranormal Activity”.

One grandson suggested “Six Feet Under” 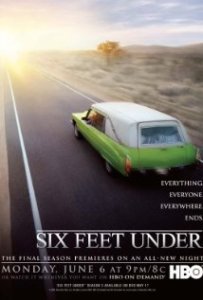 He said it had the best ever last episode of any series. I watched it and agreed. I like “Hell on Wheels” and lots of the BBC murder mystery series–some of which are many years old. And, of course, “Downton Abbey”. Nature and science programs also show up on my recommended list.

The new Netflix originals are a great addition to the already amazing amount of choices. “Orange is the New Black” and “Sense8” are super.

Another really nice feature, for a person hard of hearing as I am, is to activate the closed captioning. It has made a world of difference in my viewing pleasure.

I have a new weekend hobby–watching foreign films on TV through Netflix streaming video via ROKU. Foreign movies give a bit of insight into other countries’ people, customs and sociological convention. Also, climate, dress, and even food. I hear a foreign tongue, see them eat tongue, and watch them tongue each other while having sex. (Foreign movies having much more naked and writhing bodies than your typical Hollywood films.) I like the subtitles, since my partial deafness usually gives me difficulty during low-speaking or breathy dialogues.

“Jar City” an Icelandic film–a pretty good murder mystery. The main character is an older detective with a complicated personal life and a nice, young associate detective. Did you know you can get sheep’s head through the fast food drive-up window in Iceland? And, of course it’s very cold and bleak. Not the sheep’s head, the landscape. The sheep’s head, complete with eyeball, is greasy and gross. They also have close up autopsies and dig up a 20 year-old grave.

“Harem” a Turkish-Italian movie. Won some award at Cannes. Lots of beautiful women, of whom you see lots of. It tells the story of the women in the last harem of the last Sultan of the Ottoman Empire around 1900. An interesting story which encouraged me look up more information on the history of the times. Gorgeous sets and costumes, when they were wearing any. 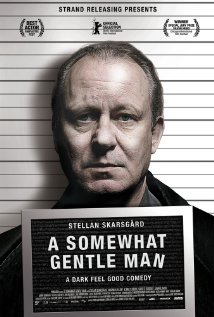 “A Somewhat Gentle Man” a Norwegian film staring one of my favorite actors, Stellan Skarsgard. Mostly you think of Ulrik as “that poor bastard.” He’s just been released from prison and is stumbling his way into several unsatisfactory relationships and quickie sex acts. He’s also eats many meals, all of which contain some kind of fish. But, the characters are quirky and fun and it does end fairly well.

“Biutiful” a Spanish film which is not pretty or even attractive. It’s ugly, sweating, dirty, sad, depressing…need I go on? Sometimes these kind of films are called arty. I call this one awful and waaaay too long. Interesting mix of multiculturalism, though.

Last one, “Vidocq” a French film, starring Gérard Depardieu. It’s a mix between a supernatural thriller and detective movie. Intriguing and interesting with great characters and interesting sets. Looks like France in the 1830‘s had plenty of decadence and opium smoking.

You can find these films and more at Netflix or IMDB.