Disabled Hondurans — voices for the voiceless

On February 26, 2015 eighteen members of the Honduran Association of Migrants Returned with Disabilities (AMIREDIS) began a journey across Central America to the United States. Their purpose to “raise awareness about the perils of riding on top of train cars on the Mexican railroad commonly referred to as “The Beast” (La Bestia in Spanish). AMIREDIS activists also “promote justice and rights for disabled persons” as their distinctive commonality is traumatic injuries incurred while riding La Bestia.

AMIREDIS represents more than 70 of the 700 persons in Honduras who have been maimed by a similar train accident.  For those seeking to escape a country rife with corruption, violence, unemployment and poverty, it is a courageous decision to take the long dangerous journey, across Central America and Mexico hoping to immigrate and/or reunite with family. “We have dreams of a better life,” said Jose Luis AMIREDIS president.

At the end of a grueling journey to the United States border, thirteen of the men turned themselves in and were incarcerated in the Eagle Pass detention center. They were transferred to the South Texas Detention Center in Pearsall where they stayed for over a month until RAICES (Refugee and Immigrant Center for Education and Legal Services) facilitated the release for 11 of the men who vow to continue the journey. “Thank God for RAICES,” said Jose Luis. “The detention centers have no way to care for people with disabilities, so we are thrown in a cell and forgotten.”

Last week at the Episcopal Church of Reconciliation, four members of AMIREDIS, accompanied by RAICES attorney/advocate Mohammed Abdollahi, came to tell their stories to a group of interested San Antonio citizens. Abdollahi said, “These men have a credible cause for asylum.” Elaborated in a court document submitted by Attorney Jonathan D. Ryan, RAICES Counsel for the Respondents, the group’s “advocacy has garnered international media attention, effectively exposing the Honduran government for its incapacity to assist its disabled nationals; while the Honduran nation survives on the remittances of migrants who risk their lives travelling, it does little to support or assist those who return disabled. Consequently, these men now confront both the challenge of coping with their disability in Honduras, as well as retribution from the Honduran government for their advocacy.” 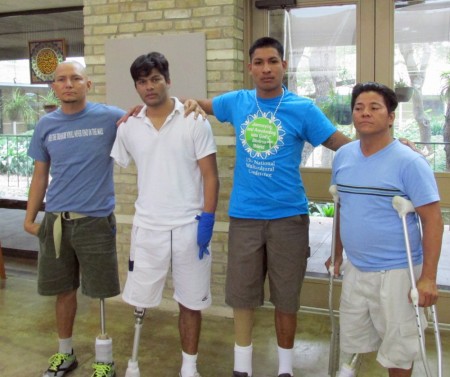 “In Honduras there are a lot of gangs,” Alonzo told us. “Because I didn’t want to join, they were harassing me to the point I felt I needed to take my chances to immigrate, or be killed.” “I had ridden the trains for days, been assaulted and was very hungry, thirsty and tired,” explained Alonso, who left a daughter with his mother back in Honduras. “I ran to get on another train, grabbed onto the railing to pull myself up and was dragged behind for several minutes. Finally I pulled myself up onto the train, but had mangled my leg in the process.” After a quick amputation and medical care in Mexico, he was deported back to Honduras.

“There are no jobs for disabled people in Honduras,” Ifrain told us. “There is such competition for work anyone with a disability is left completely out. And, there are no benefits for unemployment or disability. We come to try to find work and help our families back in Honduras.” He was deported back to Honduras after being assaulted and thrown from a train traveling through Mexico resulting in the loss of one of legs.

The group is continuing to visit with people to help spread their message and to raise funds for the journey to the Washington where they hope to speak with advocates and policy makers. They have put their faith in God to help them be a voice for the voiceless, advocating reform in a broken immigration process.  “Nothing is impossible,” says Jose Luis. “We want to talk to President Obama.”

Immigration is a complicated issue. And, I don’t claim to know even a tenth of the legal or legislative aspects. But, I do know a compelling human story when I hear one. I also know that except for the Native Americans, we are all immigrants or descendants of immigrants.