A few years after we lost our 18-year-old cat, the husband and I decided we needed another kitty in our lives. Cats are cuddly, can be kept indoors easily and we just like them. We went down to the Animal Defense League and adopted a cute little black cat with white paws. The husband thought Lover Boy (the name he was given by the shelter staff) really chose him by putting his little cat paw through the cage and tapping him on the arm. “He looked at me like, ‘boss, get me out of here,’” hubby said. 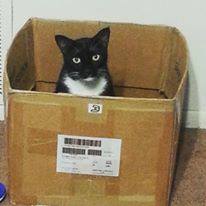 All went well for the first year or so. We live in a townhome complex. One reason we bought this house is the floor to almost ceiling windows looking out on a common area with lots of big trees. There are also several feral cats who roam the complex. The problem with kitty began when these cats would come right up to the windows and drive our cat nuts by being in his territory. Well, actually, he’s neutered so he doesn’t have nuts. But, unbeknownst to us, he could still spray urine. All over the curtains, the carpet and windows.

It took a while to understand where the stink was coming from. The curtains reeked. So I washed them. But, as many of you know, NOTHING ever gets rid of the smell of cat pee. It may seem to work only because our noses can’t smell it. But the cat can.

Here are some of the things we tried to de-stink the house and stop the cat from marking inside.

Replaced the curtains, with shorter curtains, higher than his butt could reach. Which looks dorky, but so what?

Replaced all the carpet in the house with flooring.

Put furniture over the spots where he frequently went.

Squirted him with a water gun when we saw him peeing in an inappropriate place. (He is very stealthy, though)

Constantly and vigilantly cleaning up the pee puddles, spending a fortune on ‘guaranteed’ to work chemicals cleaners and sprays.

We starting letting him outside to pee in the early morning, risking the ire of the HOA Nazis. But he continued not peeing in the litter box, only in front of the windows—and occasionally on us.

When he marked my brother’s leg, we decided to take him to the Vet once again for testing.  She was very kind, but told us he was healthy, and if this behavior has been going on for a long time, the odds of changing it was slim to none.

So, we added an extra litter box and bought $60 bag of “calming” pet food with tryptophan.

Then my brother told us about Crazy Water, bottled water from Mineral Wells, Texas which has a naturally occurring high percentage of  lithium. Lithium is sometimes used to treat anxiety and/or depression. Mineral Wells touts its extremely low rate of murders and aggressive behavior is due to the high level of lithium in the water.

I researched how to make homemade cat repellent. I made several versions of natural sprays and cleaners some with Eucalyptus and Wintergreen essential oils and Mrs. Myers dish soap.

We are having some success with the water, food and Eucalyptus oi 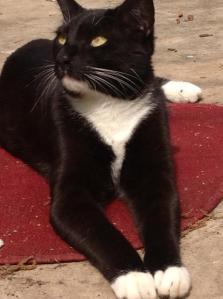 l (as a deterrent) combination attack. There has been a decrease in the frequency of urination. Lover Boy now only has about three spots in the house he pees, rather than eight. And, he sometimes uses the box.

We think the house in general smells better, but I’m afraid to ask an impartial visitor if they detect Lover Boy’s urinary indiscretions.

Now if we could just keep the damn squirrel out of the birdfeeder.

This entry was posted on Wednesday, May 11th, 2016 at 9:52 pm and is filed under Pets. You can follow any responses to this entry through the RSS 2.0 feed. You can leave a response, or trackback from your own site.